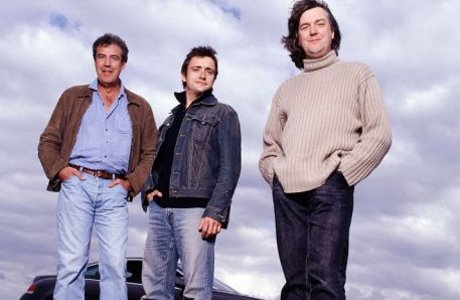 I have a letter from a young woman who has an addiction. She’s into Top Gear. Not for the cars ……… but for the boys!!!!!

I have a serious problem. I absolutely love the show Top Gear. I’m not a revhead, and I don’t have a boyfriend. But I’m not into the cars …. I only watch it for the guys who host it. I have a hugely massive crush on them. What can I do.

I know how you feel. I drive a car but am not a revhead myself. I watch the show but don’t care much for the cars. I watch because it’s freakin hilarious to see what the boys get up to, and what they do to each other. There has been many a night I’ve sat and pissed myself laughing over what they’ve done. There is nothing wrong with having a massive crush. Just as long as they don’t know about it, and you definitely don’t go telling anyone else about it, you should be fine. And just as long as it’s not Jeremy Clarkson or James May, you should be even better!

You’re a freak … but then aren’t we all?

And if you feel the need to get off when watching it, Ewwwwww, don’t tell anyone about that either!!!!!!!!

I, Jewels Diva, will admit here and now … that I do have a crush on Richard Hammond!

But don’t go telling anyone I said that cause I will deny everything!!!!!