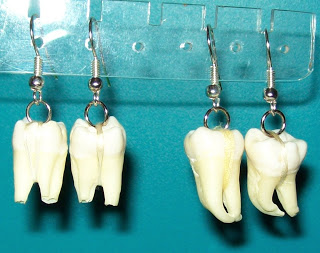 Okay, so I couldn’t wait for the weekend. Here they are … my wisdom teeth earrings. The small ones are my top teeth, the large ones are my bottom. Cleaned for a week in bleach, then wrapped cotton around them and stuck a jump ring and hook into it.

The bottom ones came through first, followed six months later by my top ones. I was 16, and the tops were so sharp, they dug into the gum still partly covering my bottoms. I had the tops out first, six months before my 18th bday. And six months later, I had the bottoms out. They were the worst, killed me with pain, and gave me fat lips. (I do not do well looking like Mick Jagger) Ten panadol didn’t work but two anti-inflammatories did. It was one week before my 18th bday and I had to mash bananas and hot chips with a fork and suck them down, and sip soup through a straw because I couldn’t move my jaw.

I had told the nurse the first time that I was into making jewellery and said I’d turn them into earrings. Two weeks later when I went back for a check up, I was wearing them.

The dickhead dentist demanded – ”you did clean them didn’t you?”

I wear them every now and then, and people are grossed out. They can’t believe they are actually my teeth.