This year is the 20th anniversary of a little known Aussie band from way back when called Indecent Obsession.

They bounced into my life way back in 1989, and I was smitten. They had four top 40 hits – Say Goodbye, Tell me Something, Never Gonna Stop and Come Back to Me – with their first album, Spoken Words, which got lots of people noticing because the band wore neon wetsuits! Later that year, the record company re-released it with a different cover. The pics are below. I also have the American version. So that makes the cassette, cd and album of all three versions. I’m such a collector!!!!!! 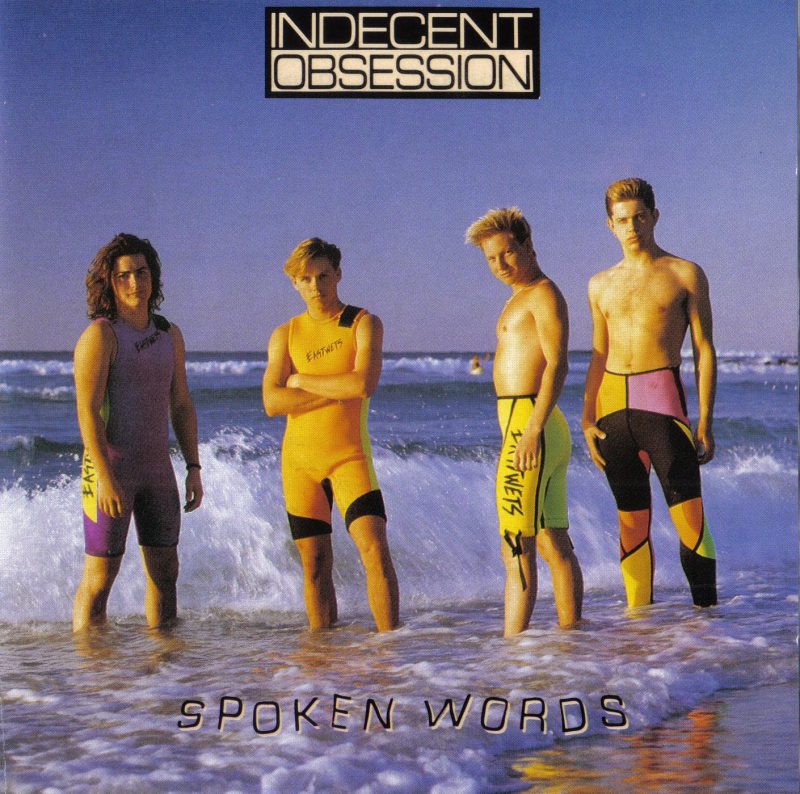 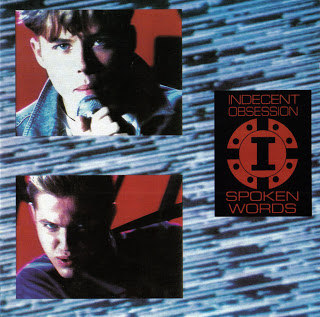 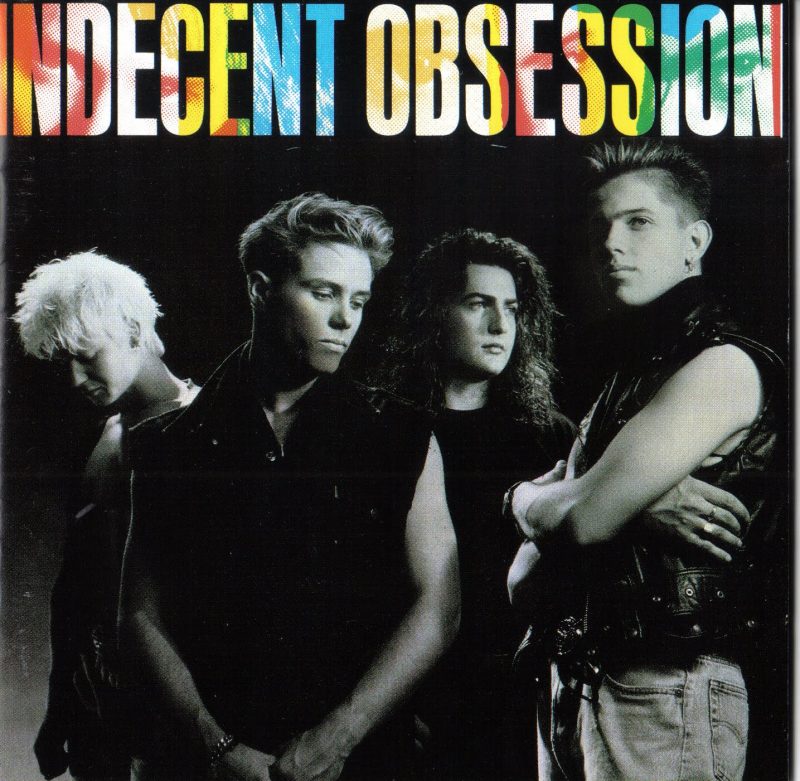 Videos for Say Goodbye, Tell Me Something, and Come Back To Me – (couldn’t find one for Never Gonna Stop) –They toured in December of 89, and I wished I had’ve seen them when they toured with American poplet, Debbie Gibson, now known as Deborah, they only went to three states of this country, so I missed out except for when they came on their own.

I’ve still got my promo packs, and collectables, the vhs tape of their videos, and all the goodies there was. In 1991 they were in America making their second cd, Indio. 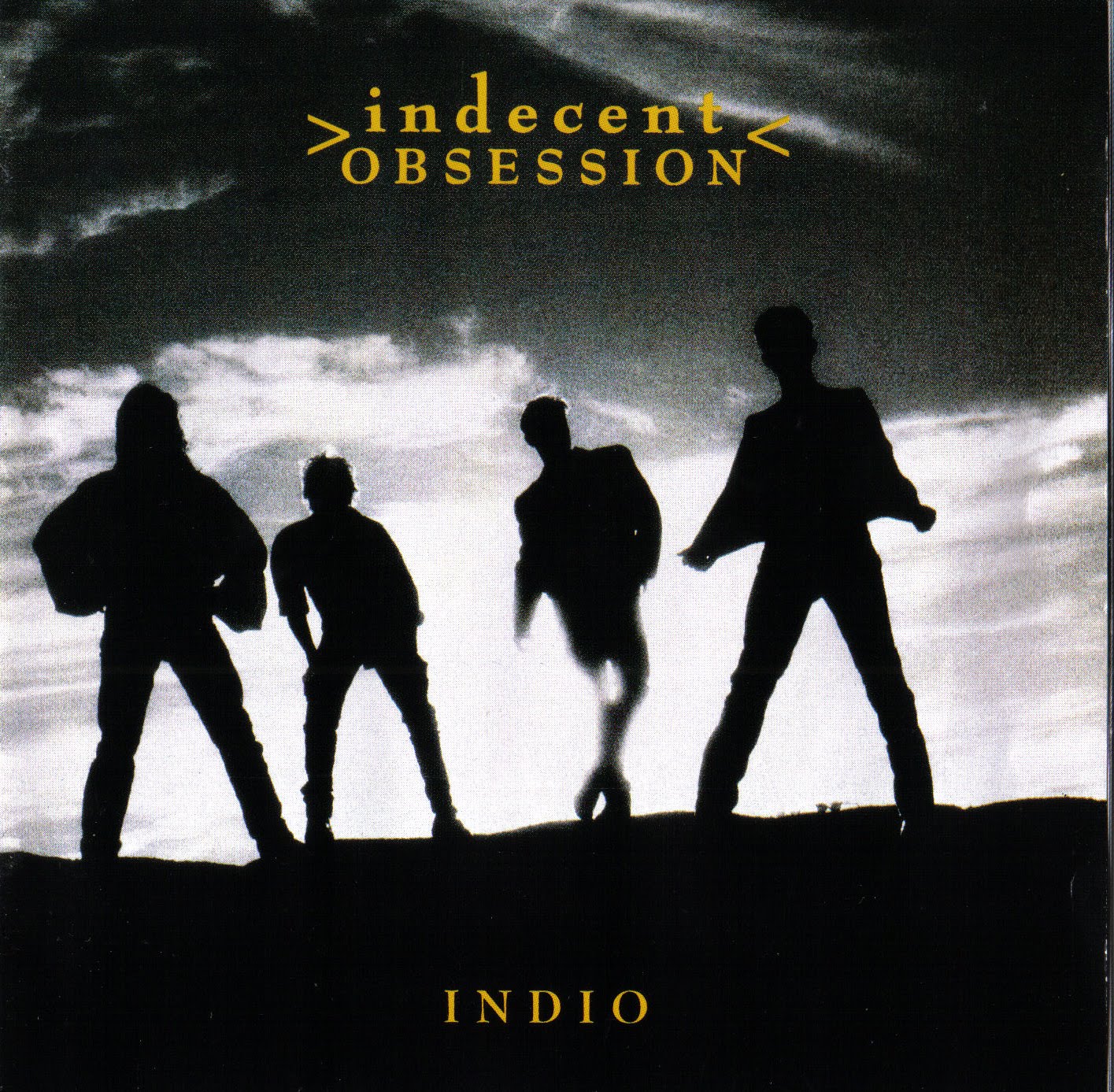 There were four singles from that – Kiss Me, Indio, Rebel with a Cause and Gentleman Style. I love that song, but I don’t know if there was ever a film clip. Over in France, Whispers in the Dark was released and went to number 1. It wasn’t here, but I found the cd single and bought it off ebay.

In 1992, lead singer, David Dixon, left to pursue the Aussie stage production of Joseph and His Dreamcoat, He was also in our local soapie, Home and Away. That was the end of IO as it was. Andrew Coyne, the guitarist, also left, and remaining members, Michael Szumowski (pronounced – szoo-mouse-key) and Darryl Sims, moved to England and hired Richard Hennessy as the new singer, and Graham Kearns as guitarist, who actually looked liked Andrew Coyne with short hair. Quite good looking he was!

What followed was Relativity. The first single, Fixing a Broken Heart, was a ballad that accompanied a tour of Aus. Fall From Grace followed as the second single but did nothing on the charts. Overseas, One Bad Dream was released in Japan, I acquired that as well. And there’s a film clip for Lady Rain but I can’t find a single yet. 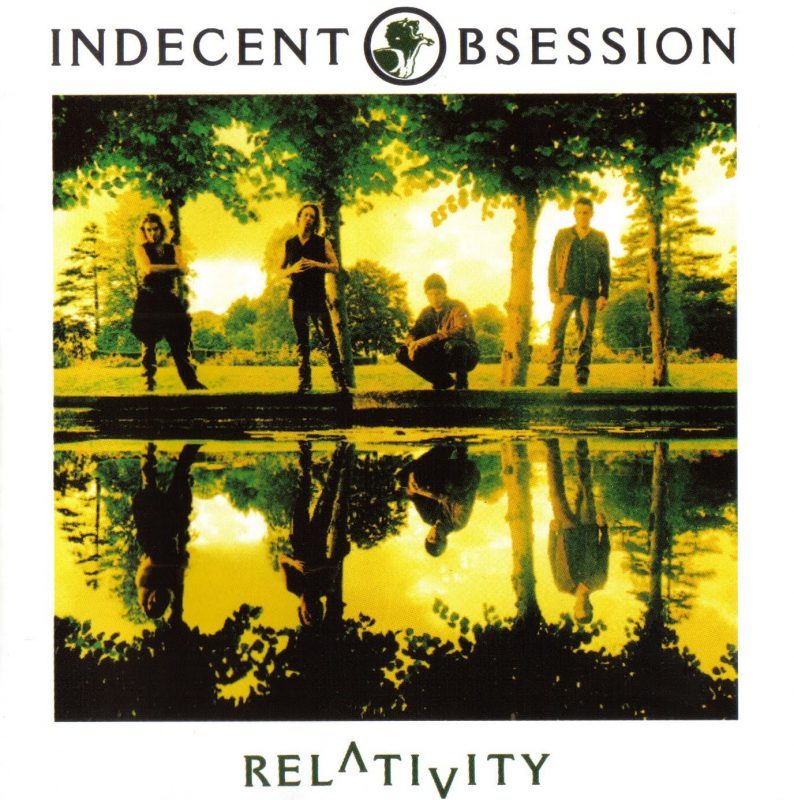 Indecent mark 2 was a new style of band. It was like David and Andrew had never been, the music was harder and edgier, and was completely different. They didn’t last long though, as there were no more cds or singles.

Indecent Obsession was over. Never to be reformed.

David Dixon has lived in many states and countries, pursuing a career in theatre and taking his family with him. The latest goss is that he lives in Orange. A town in New South Wales. He did release a cd single, Faith Love and Understanding, but I’ve never seen a cd.

Andrew Coyne seems to have disappeared off the face of the earth.

Darryl Sims, has worked with different bands but his whereabouts are not currently known.

I still love IO, and have most of my stuff. I just wish, in their 20th year, and with 80’s music being so popular, along with bands making comebacks, that they would too.