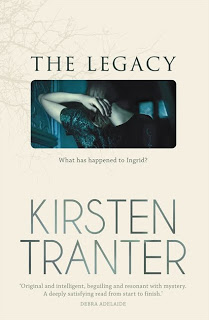 The Legacy, by Kirsten Tranter.

That’s what this book did.

Or maybe it was the reviews I read in the magazine that lead me to believe this book was going to be all about the mystery it eluded to. The blurb on the back of the book sounds just as good –

Beautiful Ingrid inherits a fortune and leaves Australia, and her friends, and Ralph who loves her, to marry Gil Grey and set up home amid the New York art world. There she becomes the stepmother to Gil’s teenage artist daughter Fleur, a former child prodigy, and studies ancient curse scrolls at Columbia University. But at 9am on September 11, 2001, she has an appointment downtown. And is never seen again.

Searching for clues about Ingrid’s life a year later, her friend Julia uncovers only further layers of mystery and deception.

It didn’t lead me to anything but boredom.

This is not a book review, it’s a book bitch.

About all those books you ever read a review to, in a magazine, or saw someone talking about on tv, and it drew you to go to your library and borrow it, or borrow from a friend, or even buy it to find out what happened to Ingrid.

The book is told from Julia’s point of view. The first half of the book is all about how they all met. Julia became friends with Ralph, then his half cousin, Ingrid, moves in with them when her parents die. He becomes insanely infatuated, and Julia eludes to sexual intentions between them. But we never see anymore than Ralph being possessive.

They all take drugs, drink themselves into oblivion, then drive, go to college and party hard. Julia’s not rich, but likes taking what Ralph buys her. She flies off to New York when Ralph pays, stays at his uncle’s apartment for free so they can find out if Ingrid really died that day. And what happened to her. She also steals, has sex with Ingrid’s college professor, ALOT OF IT, and runs all over the city on her own trying to play Nancy Drew and doing it REALLY BADLY!

Well, the mystery is barely worked on. Turns out, they don’t find her, but only figure out she used that day as a way of escaping husband Gil, who beat her and apparently was a fraudulent art dealer.

But no, the story is mainly about Julia, so peeps, while this story may sound good, it’s not.

And I don’t have anything against the author, who’s Australian.

This story just didn’t do anything for me. The first half of the book was the backstory and the second half didn’t live up to my expectations. I could have cut half the book out, and re-written the second half. It was too full of detail about rooms and clothes and smells and sounds. We don’t really need that. I choke and suffocate on detail and my eyes glaze over when there’s too much of it and I start skimming over words that swim before my pupils.

But don’t let my opinion put you off from reading it if it intrigues you. Just borrow it and don’t waste your money.

Are there any books that have intrigued and then disappointed you? Let me know and I may not bother reading them.

I’d rather read a Jackie Collins, at least you get lots of sex and intrigue. Although some sections of some of her books have bored me as well.