Well it was the 53rd TV WEEK LOGIE AWARDS last night and there was some controversy where I’m concerned.

Up for best new talent was Chrissie Swan. Now she made a very small name for herself in 2003 when she was the runner up in the second series of our Big Brother. She then had a job as a radio host in some state where most people didn’t hear her, and then last year she got one of four hosting gigs on channel 10’s new morning show, The Circle.

The Circle replaced 9am with David and Kim, which I thought sucked because I loved David Reyne, but next to no one watches the show, only about 60,000 people, so most didn’t think the show should have been up for most popular light entertainment, or whatever it was up for. And she was up for the Gold Logie. GOD KNOWS WHY!!!! She shouldn’t have been. Barely been on tv a year she should not have been up for the Gold and a lot of people thought the same.

We had Katy Perry perform Fireworks.

We also had Maroon 5 with their new song, Andre Rieu presented an award and Hamish and Andy were up for a gong but didn’t win. 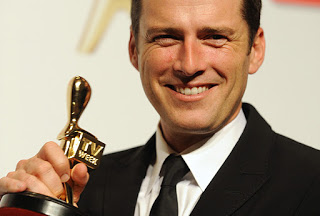