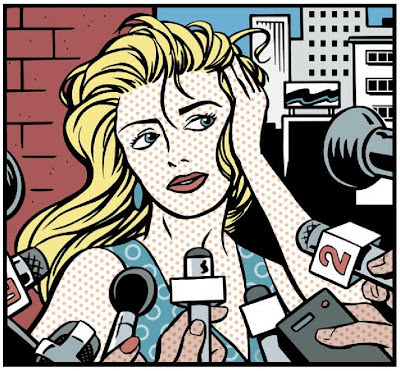 So many women in the public eye are annoying me lately.


Whether they are models, actors, newsreaders, hosts, they just annoy me with the way they talk and act and carry on.


They speak with childish voices, they act like children, or like they’re speaking to children, they walk without conviction, they stand all hunched over and not to mention the fake tans, fake make-up, and fake hair dye.


So many women in the public eye are fake in so many ways.


I want an adult woman to act and speak and sound and walk like an adult woman. And dress like one for God’s sake. Don’t wear clothes meant for children or have your skirt up to your crotch.


Get some dignity for God’s sake. Grow the fuck up. Be and act like the adult woman you are supposed to be.


I’m sick of idiotic voices and hair parted in the middle. I’m sick of being spoken to like I’m five. I’m sick of adult women standing with their legs crossed because their skirt is so short. I’m sick of seeing immature, idiotic, childish, brainless adult women acting like children because they think they need to, that’s what we want to see and hear, or the fact they have absolutely no self-esteem whatsoever.


They are insecure, lacking confidence, self respect and maturity and I am really sick of seeing these women on my tv, in my magazines, on my radio. I’m sick of idiots and morons trying to represent me in the world and I wish it would stop!