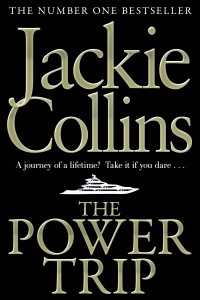 In The Power Trip you will meet Aleksandr Kasianenko, a billionaire Russian
oligarch, as he sets sail on The Bianca. You’ll meet his sexy supermodel
girlfriend, whom The Bianca is named after, and five dynamic, powerful and
famous couples invited on the yacht’s maiden voyage: Hammond Patterson, a driven


You will also meet Russian mobster, Sergei Zukov, a man with a grudge against
Aleksandr. And Sergei’s Mexican beauty queen girlfriend, Ina, whose brother,
Cruz, is a master pirate with orders to hold The Bianca and its illustrious rota
of guests for ransom.


The Power Trip — Take it if you dare.

—————-
Jackie Collins latest release is The Power Trip and I read it yesterday in 3 and a half hours.
Generally I take 3 hours to read a Jackie book so maybe this one was longer, I’m not sure, but it was thrilling from start to finish.
Jeromy was an absolute arsehole who definitely needed to be dumped by Luca.
Senator  Patterson was even worse, a raping, molesting, violent son of a bitch that you just knew had to die at the end of the book.
Serves the bastard right.
You also had the feeling that Aleksandr and Bianca would not last when she threw tantrums over Xuan.
You want some dead and you want some together, but you don’t necessarily get what you want.
But if you want Jackie Collins, then read The Power Trip. Her best yet!
Spread the love for LJD!