So Celebrity Apprentice was back last night…. 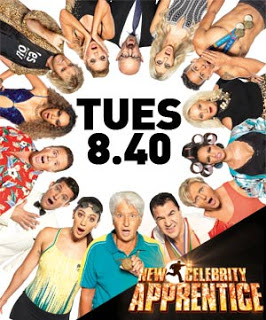 And the celebs this year are even worse than last year.

Going up against the youngsters of wanna-be pop princess Prinnie Stevens who bombed out of last year’s The Voice, Big Brother runner up Laylah who’s done nothing since, Swimmer Stephanie Rice, dancer Kym Johnson and ex Idol contestant Rob Mills.

Most people, especially youngsters would have no idea who they are or what they do.

Hell, even though I know who they are I couldn’t give a shit and yes, they are the bottom of the barrel celebs. I think that so many of our stars have gone overseas to live and work that there are next to none left to use as either contestants or judges on our shows. No wonder we keep importing foreigners for our talent shows, (now we’ve got Geri bloody Halliwell for Australia’s Got Talent), there’s no Aussies left.

I don’t think Gen Ys will be big watchers of this show even though Laylah and Prinnie are on, (Prinnie got booted off last night), and Millsy’s not much to look at. Dawn’s an idiot for her age and Jeff still hasn’t learnt to speak properly (where’s that police record of his?). There’s the obligatory channel 9 representatives in Laylah, Prinnie, Stephanie (who also got a job on the Today show), and Dermott.

Overall these shows are nothing but shit and I won’t be watching, unfortunately, being network shows, they show all the details the next day on all the morning shows anyway so we all end up seeing it.

When are we going to get this shit off tv?