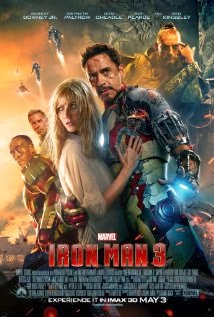 On Saturday night I caught up with Iron Man 3. It seems I’m on an Avengers kick lately as Thor and Captain America, plus Iron Man 1 have been on tv.

This was set after The Avengers movie, ran about 2 hours and I found it a little drawn out. Parts could have been cut out, and the only good bits were when his house was blown apart and at the end when he finally caught up with Guy Pierce. And Ben Kingsley, weird!

The end of the movie seem to signify an end to the Iron Man movies in general. He got Pepper help and finally got help for himself, by having surgery to remove the shrapnel, and now he doesn’t need that contraption in his chest. His house was gone, he blew up his suits, he essentially had nothing to rely on any more.

I did love the closing credits, it was very 60s style with it’s music and way it was all put together and I found myself dancing along, noticing that some images were also from Iron Man 1.

So with the way the story ended, the images in the closing credits also being from movie number 1, I definitely got the impression this might be the last Iron Man.

And of course Sherlock Holmes number #2 with Robert was on last night and strangely, and eerily, you can see some weird resemblance between his characters of Sherlock and Iron Man. Same quick wit, same way of moving, very weird.