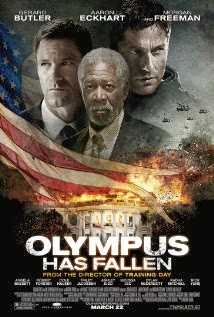 So I caught up with Olympus Has Fallen on Monday night, and for a movie that only came out this year and I’ve only just seen it, I have to rank it as one of the most violent movies I’ve ever seen.

Between knives going through jaws and into temples, everyone shooting, beating, stabbing, slicing, dicing, choppers and planes being shot down, it was mind blowing how much killing there was. But then I suppose you can’t really take the White House without it.

Aaron Eckhart was the President and Gerard Butler (yum) was Mike Banning, the disgraced former Presidential Secret Service agent, although it never said why he’d been fired you could surmise it was because 18 months earlier he saved the president from sliding off a bridge in his limo, unfortunately that meant he didn’t save Mrs. President (Ashley Judd) and she went arse over tit in the limo and died.

Overall, if you like violent movies, or Gerard Butler, then watch the movie, if not, steer clear of this mind blowingly violent action flick.