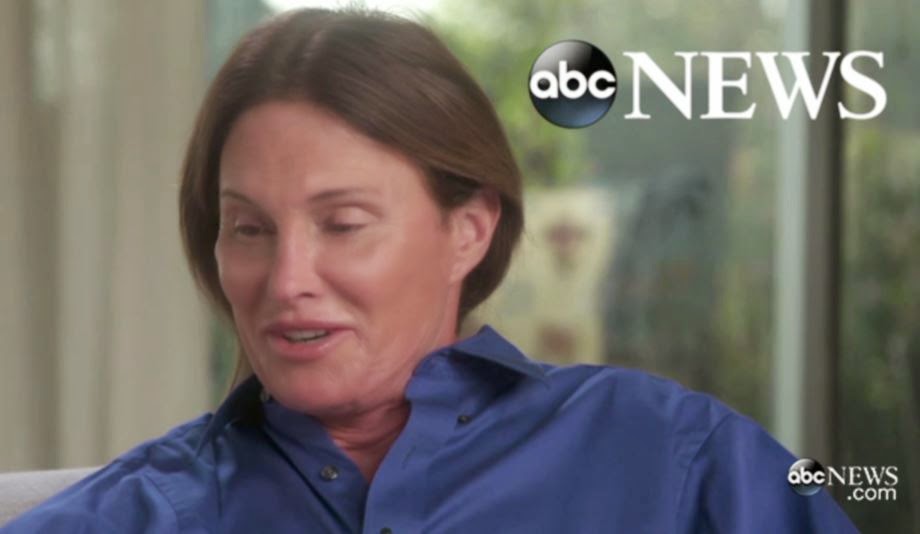 This week Bruce Jenner finally came out on his interview
with Diane Sawyer.

Came out as a woman that is. Something many knew but most
were waiting for him to talk about, because really, whose business is it but
his.

“For all intents and purposes, I’m a woman,” Jenner said in
a special two-hour edition of ABC News’ “20/20.” “People look at me
differently. They see you as this macho male, but my heart and my soul and
everything that I do in life — it is part of me,” Jenner, 65, said. “That
female side is part of me. That’s who I am.”

Jenner detailed his internal struggles with being
transgender, which he said he has wrestled with since childhood. “I look at it
this way—Bruce always telling a lie. He’s lived a lie his whole life about who
he is. And I can’t do that any longer. My brain is much more female than it is
male. It’s hard for people to understand that, but that’s what my soul is.”

Experts and Jenner explain that there is a difference
between gender identity and sexuality, and the thrice-married Jenner revealed
that he has only been attracted to women. Jenner said that each wife, including
reality TV star and Kardashian matriarch Kris Jenner, knew about some aspects
of his struggle.

There are two things that really shit me about situations
like this.

1 – The mixed messages real straight women receive on a
daily basis that we must accept who we are, the bodies we have, the problems we
have, and learn to deal with and live with them.

So then why is it different for transgender, gay, bi,
whatever the hell you want to call it?

Why is it perfectly okay to tell a man that if it makes him
happy to be a woman go ahead and change?

Straight women need to suck it up and accept ourselves so
then why shouldn’t men, or other women who feel the need to be men? Why should
it be different for straight women?

The mixed messages suck shit and I’m sick and tired of one
section of the community being pandered to while the rest of us are told to get
the fuck over ourselves and deal with our own shit.

2 – I don’t give a flying fat rat’s if you’re gay, bi, trans
what-fucking-ever, if you have any inkling that you may not be straight then
you don’t fuck with others emotions.

I have read and heard many stories from gay men who are
finally happy being out and proud and talk about how they first knew and how
they first felt. Yet they went on to marry women and/or have children.

If you’re so confused then stay single until you sort your
shit out because fucking with others and their lives is NOT okay!

Shit also happened around the world this week so let’s get started.

First, Nepal had its earthquake, and with anything like this
it’s always horrible. But there is something that shits me. Families have the
right to worry, absolutely, but to get shitty because you don’t hear from your
loved one straight after it happens, especially in a country like Nepal, is
crap. For a start, wifi and internet, let alone cell phone connections are
going to be few and far between. Secondly, your loved one may be in a place
that has none of these and they would need to find them.

As for the survivors, I seriously doubt contacting loved
ones or updating their Facebook status is their first priority. What would be
first and foremost in their mind would be getting to safety, if they’re alive.
So why is it so hard for families to then comprehend that they cannot be
contacted immediately? I get it, your loved one could be dead, but to demand or
expect an immediate phone call or some other form of contact is stupid and
expectant and rather arrogant and narcissistic on your part. Grow up and
understand that contact is not the first priority for people in situations like
these.

Second, Baltimore was set on fire this week because once
more black people rioted over a black person being killed by a white cop.

One mother took charge of her son and beat him upside the head to get him home and the whole country is applauding her for it.

What in God’s name is in the head of these uneducated
fuckwits that says to them it’s okay to trash their own town because they don’t
like something? You have fucked up many more people’s lives by burning their
business (leaving people unemployed), their homes, their cars (they now cannot
get to work), but probably emotionally as well.

And black people wonder why they get called apes. Maybe it’s
because they act like wild animals when they don’t get their own way.

Third, Bali. The
death penalty was brought down upon two Aussies this week after ten years in
jail. Aussie celebrities came out with a video to “I stand for mercy” in a last dash
effort to bring help to the two boys in jail. Sadly, it backfired, showing these
actors having nothing but a shit fest on Prime Minister Tony Abbott. Julie
Bishop, our Foreign Minister, was not even mentioned in the video even though
she had slogged her guts out to stop Indonesia from killing them.

But no, it was all Tony’s fault. One of the celebs, Brendan
Cowell, apologised the next day on radio but the damage was done. These actors
have gone down in my eyes, and when you have Oscar winner Geoffery Rush as one
of them, forget it, not interested in anything else you have to say.

They realised they were in the wrong to crap on Tony and
apologised too late. It should have been about the two on death row, not our
Prime Minister. Pack of dicks they are!