I haven’t talked about my health for ages, if not years, and it’s a bit of a long story.

When I was 18 I was told I had a curve in my spine and that it was scoliosis. I’ve had horrible back pain since which turned into all sorts of other pain. Migraine, sciatica etc and even though I’ve been seeing a chiro for five years now, this week I am suffering from a migraine. But not just any migraine. This is a migraine that started with sciatica.

I saw the chiro two weeks ago but half an hour later I had bad foot cramps. The sciatic nerve goes through three layers of butt muscle, down the leg and into the foot. The cramps are fucking horrendous and left my left leg aching a bit. A couple of hours later I had another cramp in my left foot and this time it left my leg aching for 24 hours. It was fucking horrible.

A week later that pain decided to move up to my right shoulder. Because when you’ve been going to a chiro you soon learn that when the bottom stuffs up, it stuffs up your whole back like the domino effect. So my right shoulder was aching and crunching.

Then, it decided to move up to the back of my head where most of my migraines happen these days. The left side hasn’t been as bad as it usually is and I did manage to get it to stop on Tuesday but it came back Wednesday and was now across the whole back of my head.

These migraines are fucking horrendous. It’s like your head cannot sit in any position without pain. It does not matter which way you turn it, the pain will not stop. And that is because my spine jacks up underneath my skull and creates pressure on the nerves.

I had hoped to have less pain by now, and overall I do. But when I get these kinds of migraines so much more comes with it. I can feel as sick as a dog, my eyes bulge out of their sockets, I cannot sit to work because I cannot hang my head to look down. Hell, even hanging the washing with my head up the other day made it ache, and it’s aching now as I’m typing. 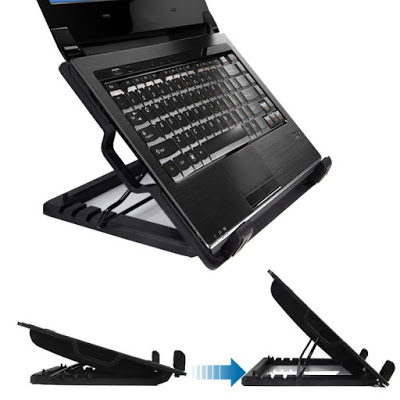 And my chiro knows all about when I’ve been hanging my head because she knows the issues.

So, a couple of weeks ago I went looking for a laptop lifter. I have no idea if they’re actually called that but that’s the name I gave it. I went looking in several stores and no one had any so I logged into ebay when I got home and bought the cheapest. It’s actually a cooling pad for pcs but I’m using it purely for the lifting abilities to get my pc up higher to my face so my neck is not craning downwards all the time. Sadly, when I’m writing, my neck and head are down, so that sucks as a writer who writes in long hand and not straight onto the computer.

Have you guys needed to get one of these or even put your pc up higher to prevent mother fucking neck pain and migraines?