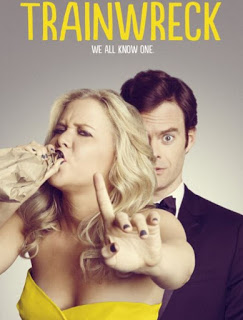 “Since she was a little girl, it’s been drilled into Amy’s head by her rascal of a dad that monogamy isn’t realistic. Now a magazine writer, Amy lives by that credo – enjoying what she feels is an uninhibited life free from stifling, boring romantic commitment – but in actuality, she’s kind of in a rut. When she finds herself starting to fall for the subject of the new article she’s writing, a charming and successful sports doctor named Aaron Conners, Amy starts to wonder if other grown-ups, including this guy who really seems to like her, might be on to something.”
I saw Train Wreck last week after hunting down a copy online and have no issue admitting I didn’t think much of it.
Maybe I’m a prude, but I’m over sex scenes in movies, although it was purely for the purpose of the script, I’m over women having one night stands.
I get that it’s all about a woman finding her way through life, aren’t we all, I just didn’t think it was funny enough for a movie.
Were there laugh out loud scenes…I can’t remember lolling, but I did chuckle a bit. I also fast forwarded through a lot of it.
And why is it so hard for a woman to believe a guy really likes her and didn’t just butt dial her?
This movie for me wasn’t overly funny or overly clever. It’s just a simple story of a woman trying to live life. What’s so funny about that?
And what a moron Amy’s dad was for instilling such twat shit into her young impressionable head. No wonder her character’s an emotional mess and can’t have or find a decent relationship.
I give it 5/10
Spread the love for LJD!