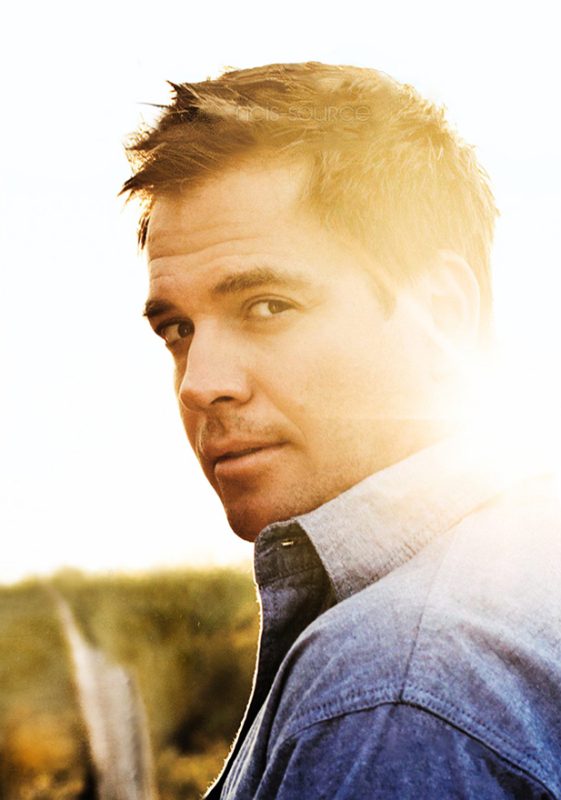 I was in the middle of having two months off when news came in that my gorgeously gorgeous ex-husband, Michael Weatherly, was leaving NCIS at the end of the season.
Maybe it’s because he’s getting old, maybe it’s because 13 is an unlucky number, either way it tweaked my heart and I felt sadness.
Michael was the inspiration behind my first two novels and I will always be grateful. Hopefully, in the next few years, he will also provide inspo for a prequel and sequel to my novel, The Road To Vegas, so I wish him all the best.
And speaking of NCIS, it started again this week in Aus and boy, does Mark Harmon look different! Either Gibbs is looking mighty old all of a sudden, or Mark has had something done.
Now I know I was watching something else at the same time but did I miss the time jump between Gibbs’s surgery and him being back at work looking like he had a speak impediment and that there was nothing wrong with his shot-up knee?
Either way, it was a bit of a boring ep and I know I won’t be watching once Michael leaves. After all, he’s the only reason I watched it in the first place.
Next, what the fuck is going on in the world when dozens of celebrities all die from cancer or something else within two months. Jesus H. Christ! David Bowie, Alan Rickman, Natalie Cole, Celine Dion’s husband and brother, the list goes on.
Maybe it’s because they are humans like us and suffer from diseases like us, it just happens that because they are famous we hear about their deaths. We didn’t hear about the other millions of deaths from cancer did we? No, just because those people aren’t famous. So it always seems to be a shock when we hear of so many deaths in only two months.
Now, reality TV here in Aus has started. We are being ambushed with show after show after show in the next few weeks as they all kick in along with a bunch of series coming back with new seasons.
Although this is all on top of a new lifestyle channel here in Aus that debuted last November so we get to see Housewives of Jersey and BH from the beginning. God, are they bitches! And a whole bunch of house renovation shows which were interesting when there was nothing else on over summer.  Now, they’re just boring.
Already we’ve had a load starting from Sunday night. Channel 10 started the week with our version of I’m a Celebrity Get Me out of Here followed by the new season of Modern Family and The X-Files.
I found it funny that they used the original opening yet they all look so much older. And has Gillian had botox or a brow lift cause her forehead is much higher than it used to me. And she doesn’t smile. Too stiff! And David’s too old! The story wasn’t overly scary, or maybe I’ve just moved on, but what annoyed me is it wasn’t continued into the second ep. Where did the UFO come from, who bought the girl off, why did they kill her?
It was followed by the new season of Limitless.
Monday kicked off with not only ABC starting British show The Bill from the very beginning but Murder She Wrote as well, which just happens to be on a the same time as Diagnosis Murder on channel 11.
Channel 7 had My Kitchen Rules, channel 9 had Australia’s Got Talent followed by Farmer Wants A Wife and channel 10 had I’m a Celebrity, X-Files and the new season of Elementary. While RHOJ was on 94. God Danielle is the most narcissistic arrogant piece of shit bitch I’ve ever seen on TV!
Tuesday was channel 7s My Kitchen Rules followed by two hours of new Bones and the return of Motive. Channel 9 had new Big Bang and Grease live and channel 10 had I’m a Celebrity followed by the return of NCIS and NCIS LA. Channel 11 had the premiere of Angel from Hell and Channel 94 had the US Bachelor.
Angel from Hell touched a nerve at the end of the show when Jane was telling Maggie that our angels are here to help us and want nothing but the best for us. It certainly doesn’t feel that way in my life right now, but that’s another post. You can read all about it this post on my style blog – Jewel Divas Style
Wednesday we had a bit of a reprieve from these shows with channel 9 showing more new Big Bang with local show The Embassy and the Sean Penn El Chappo thing. And Channel 7 showing My Kitchen Rules.
Thursday had channel 10’s I’m a Celebrity, channel 9 had our current affair show Inside Story followed by Kings Cross ER, and 94 had RHBH followed by Vanderpump Rules.
Tonight has the return of ABC’s Dr. Blake Mysteries, channel 7’s Better Homes and Gardens and more My Kitchen rules.
And that’s just this week!
On to followers. Fuck, how did I lose 11 of them since last year? I’m kinda sad at that. I worked hard to get 50 plus followers. Now I’ve slid right back. Maybe it’s time to remove the google friend widget and just let people follow me.
Spread the love for LJD!