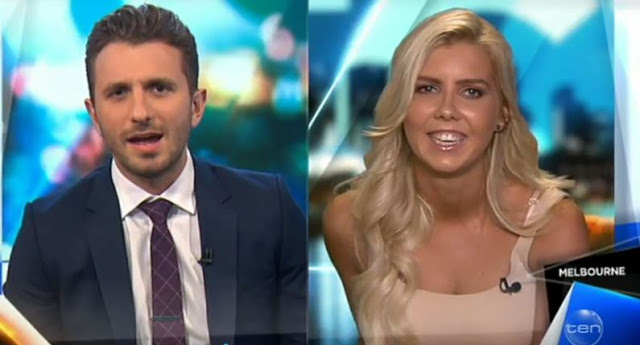 There was a contestant on our version of Survivor, who appeared on channel ten show, The Project, and spoke of how she had met co-host Tommy Little at one of his comedy gigs a few years back.
She laughed and joked like an idiot (in fact, she reminds me of an even dopier Amy Schumer) and the others urged her to tell her story then pissed themselves laughing at it.
Turns out, years ago she was dared by a friend to grab his crotch backstage at a gig.
He promptly called security and had her thrown out and blocked her on Facebook.
The next day on another channel ten show, Studio 10, they talked about the incident and whether it was a double standard. If it was a man grabbing a women’s crotch, would they all be laughing and thinking it’s okay. Donald Trump’s pussy comment was brought up.
Apparently it wouldn’t be, but you can laugh at a woman grabbing a man’s crotch because it is. The woman who was on talking about it made all kinds of excuses for Aimee and said it wasn’t a double standard in this case because of context.
LET ME GIVE YOU FUCKING CONTEXT.
1 – Tommy did not ask her to grab him.
2 – He did not encourage her to do it.
3 – He had security throw her out and
4 – blocked her on Facebook.
The definition of sexual assault according to google is –
Sexual assault is any type of sexual contact or behavior that occurs without the explicit consent of the recipient. Falling under the definition of sexual assault are sexual activities as forced sexual intercourse, forcible sodomy, child molestation, incest, fondling, and attempted rape.
So the moral of the story is…regardless of what sex you are, you DO NOT GRAB ANOTHER PERSON’S CROTCH.
Oh, and guess what they forget to mention in their haste to excuse her behaviour and not pass it off as assault…
The fact that we teach our children, that if a stranger touches your private parts, that it is wrong and to tell your parents because it is assault.
So…once we’re an adult it’s perfectly okay to grab someone’s privates and that if a woman does it it’s funny?
Anyone see the double standard, incredibly sexist and massively screwed up view of laws and society here?
Adults can’t grab a kid’s crotch, a man can’t grab a woman’s crotch, but it’s perfectly okay if a woman grabs a guy’s crotch?
So fucking not correct!
And no, it has NOTHING to do with her being ocker!
It’s wrong, plain and fucking simple because it’s called SEXUAL ASSAULT!
Spread the love for LJD!