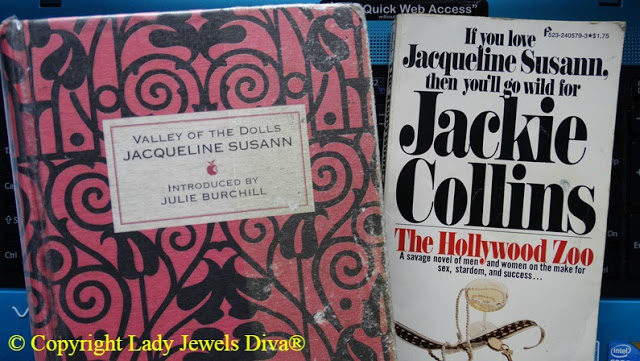 I figured since Jackie Collins was once likened to Jacqueline Susann, that it was time I read that book…

You could definitely tell it had been written in the 60s, it
had the tone and feel and it made me feel as if I was in a Mary Tyler Moore
show, a working girl gets her first job at an office, finds an apartment and
gains a social life and friends quickly.

The book starts with long-winded conversations about
everything, making it, in my opinion, incredibly boring. And these
conversations go on for pages.

There is not a lot of description of characters, not a lot
of details about background, it comes in certain parts, but by then, you’ve
forgotten about them.

The scenes jump around a little, the text doesn’t flow
smoothly, being stunted in most sections, there’s no explanation of things, not
much detail in conversations, and you have to try and keep up with the story.

Anne is so insipidly boring for a twenty-year-old. She
cannot stand up for herself, and finds herself engaged while not having the
balls to tell the guy no. She doesn’t take the ring off, doesn’t give it back,
doesn’t put her foot down until she’s cheating on him when she insists he takes
it back and he tells her to keep it. She does hook up with Lyon Burke…

Jennifer uses people to get what she wants, even women, and
is stuck trying for the affections of singing sensation Tony Polar, who has a
mysterious past that only his sister knows about.

And Neely…for some reason I thought she was a black girl, I think she’s white, but she’s
just a teen on the verge of stardom.

The first sex scene doesn’t crop up until page 116 in this
edition, and the first mention of Seconal, a.k.a the dolls, aren’t mentioned
until page 179.

So far, it’s boring. It may have been right at home in the
60s, but it’s incredibly dated now. I was actually left wondering why this was
so popular, unless it’s because there was nothing else for women about women,
written by a woman.

And for a book titled Valley of the Dolls, what valley are
they talking about? Is it a metaphor for the ups and downs the pills give you?
It’s certainly not about any valley in California, which I always thought it
referred to since everything I’ve ever heard or seen about this book talked
about actresses and pills. So my assumption was it’s about actresses taking
pills in California. Valley of the Dolls. Apparently not.

I read up to page 194 when I started reading, and all of the
above is what I got out of it. Now here’s the rest of the book…

After a tumultuous nude acting career in France, Jennifer
eventually found love with a senator in Washington, however, after seven
abortions, she’s developed polyps and has a lump in her breast. The doctor
removes it and wants to do a mastectomy. She refuses, and slips away in the
middle of the night to overdose on Seconals in her hotel suite because her
boyfriend loves her breasts so much he’s glad she can’t have kids over losing
her boobs. So she kills herself, in no great detail, and I had to read the page
twice to make sure she was actually dead. Jesus, imaging killing yourself over
losing your boobs these days…It was sad that she did that, and I cried.

Lyon breaks up with Anne to go and live in England to write
his book. (Let me tell you people, you don’t need to quit your job or go live
in another country to write a book). She ends up in a relationship with Kevin
Gillmore, owner of a cosmetics company that makes Anne famous in their ads.
Eventually, Lyon comes back and Anne breaks up with Kevin and marries Lyon,
after secretly loaning money for him to buy out the firm he works at. Things go
well, Anne finally has a baby which she names Jennifer, but in the mix of all
this is Neely…

Neely went from a fat lazy husband to a fag (in the book’s
words) husband and has two kids she really does not give a shit about. He
divorces her after she’s admitted into what is commonly known as rehab, but
known back then as a sanitarium.

(Ironically, Jacqueline Susan’s own child ended up in one
after being born autistic. There are a few threads of her personal life in this
book, Jennifer’s first husband, Tony Polar, had convulsions as a child, so is
still a child, and deteriorated so much he ended up in the same sanitarium as
Neely. Jennifer aborted their baby so it wasn’t born with the same metal
issue.)

Back to Neely. Anne and Kevin organise for Neely to be put
into the sanitarium for help as she has been self-destructive for over a decade,
and it was the second time she had tried committing suicide. Apparently, back
then, if you tried suicide, it was an automatic trip to the nut house. She got
herself better and Lyon’s agency took her on for a comeback.

Unfortunately, that comeback made her incredibly selfish and
demanding, demanding Lyon leave a very pregnant Anne so he could travel with
her.

Unfortunately, that meant the two of them started an affair
Anne soon found out about. And what did Anne do? Nothing except to start taking
the god damn Seconals. Lyon didn’t even make it for his own child’s birth. The
affair lasted for two years until he finally dumped Neely from the company and
they took on an up and comer to their company.

Insipidly weak Anne, still not doing anything about her
cheating cunt of a husband, says nothing. Not even after the New Year’s Eve
party when she finds out he’s now cheating with the new talent, because the
little girl loves him sooo much!

Quite frankly, the end made me so freaking angry I was shaking.
The fact that a friend could fuck your husband and not have a care in the world
because she’s a selfish cunt, made me want to kill her. And him.

I wouldn’t tolerate it. I sure as fuck wouldn’t put up with
it, and regardless of the fact if she had’ve told him to get out, he wouldn’t
have lasted with Neely that long because she was a demanding bitch.

So, Anne just took a Seconal and went back to the party,
becoming the typical rich wife, of a typical cheating rich husband, who will do
nothing because she is too fucking weak to do it.

Diet pills were brought up on page 210, they’re green,
Neely’s taking them, and then yellow ones get mentioned on page 215. That’s
three kinds of pills, along with Demerol that are the drugs of choice. Jennifer
takes the red ones to sleep, Neely takes red to sleep, green to diet and yellow
to wake up. Anne takes them because she’s being cheated on and wants to feel
better. What a crock! What a fucking cop out of life. I can’t confront my
husband on his cheating cunt ways because I love him so much and we have a baby
and so I’ll just take these sleeping pills to ease the pain. God, how fucking
weak! I really don’t understand taking a pill to cop out of life. Which is what
Anne does.

My overall thoughts on this books are the same as above.
It’s definitely a 60s book. It jumps around and you really need to concentrate
to figure out you’ve changed scenes, places and times. Anne is so fucking piss
weak, and I know the book starts in 1945 and goes till 1965, but I was so bored
with this until the last quarter when you started seeing that Lyon was cheating
and Neely saw Tony in the sanitarium. I think Jacqueline left the good bit
until last and made me sit through bullshit to get to it.

Once Jennifer divorced Tony, you didn’t hear of him again
until the sanitarium, so that storyline was abruptly ended. You never really
got why Jennifer killed herself now she was finally happy, even though the boyfriend
wanted her boobs. She didn’t even tell him she had to have it removed, so
didn’t give their relationship a chance. Could he have left her? Sure. But
maybe he would have stayed as well. She didn’t know, just copped out of life
because her looks and her boobs were what made her. Which just goes to show,
you really do need a good job to back you up if acting doesn’t pan out. Don’t
put all your eggs in one basket because looks fade.

And Anne…oh, god, how I want to punch you in the face for being so weak.

If you like 60s women’s fiction, give it a chance. Jacqueline
wrote other books, bizarrely, all of which Jackie Collins had in her
collection, but I won’t be giving them a go.

I did look up the movie after reading this book as I was
going to watch it. But upon reading that it’s completely different to the book,
there’s no point. I hate it when movies don’t portray books properly.