I don’t go to see movies at the cinema, but every time one comes out that I like the look of I think, mmm, that looks good I might watch that, and then I completely forget about it. 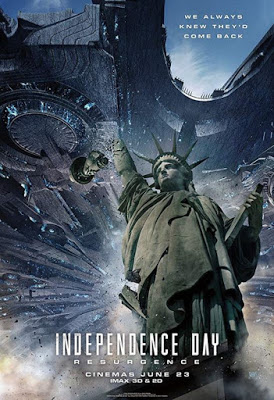 As I did with Independence Day Resurgence.

I’ve seen the first one multiple times as I love a good disaster film. And I do love me a bit of Jeff Goldblum, so this was on my list of ‘to watch’ movies. And then I forgot about it and waited until it came to tv. Unfortunately, when movies come to tv, they have bits cut out to fit into time frames.

Overall, I don’t think it was as detailed and intricate as the first. I found the movie to be a little weak on strength, as in strength of characters (they all seemed a little weak, intelligently, even Jeff’s character). It was nice that many came back from the first one, in keeping with the time line and all, but I found, and this could be from the network cutting bits out, that the new characters were not explained.

Who was Liam Hemsworth’s character? What was his back story? What was the back story of his friend who fell for the chinese girl? Hell, I don’t even remember his name, and that’s the problem, the story was not intricately laid out with detail, and I’m a detail girl. I NEED THEM! I also need to see things blow up and be destroyed. 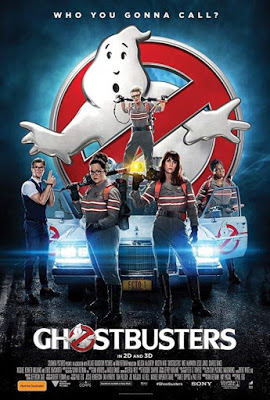 I fully understand what everyone was saying at the time this was announced and made. Movies, like tv shows, books, places, things, call us back to a time when our lives were good. They were the lives of our childhood, when times weren’t hard or overrun with bills and living expenses. It’s like when you go home to look at the school you went to or the house you lived in and it’s changed or gone. So are the memories. Because without the physical, you think the emotional will fade away.

Why do they generally continue to massacre the things we knew from our childhood that are linked to intricate memories and moments in our young, impressionable lives?

When I finally watched this on tv, I found it quite enjoyable. If you look at it like a standalone movie, and not a female remake of the old ones, it’s quite good for a bit of fluff and filler. While Kristen Wiggs’ character was emotionally weak and scared of too much until she grew a pair, Kate McKinnon’s was the funniest character.

I also see that all of the original cast, including Slimer, and except for Harold who’d already died but had a bust of himself outside of Kristen’s office, made an appearance.

Chris Hemsworth’s character was barely tolerable. While you can laugh and joke about them making a male role dumb for once, dumb characters actually turn me off. It’s like how they’ve made Nancy Drew books in the last ten years. She used to be strong and independent, now she’s an insecure clutz. Not my cup of tea. 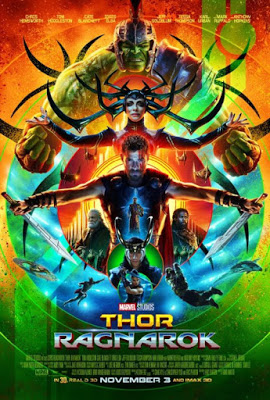 I get it, this movie was fun and frivolous and good for a laugh and seeing Chris without the fake hair was a relief. Seeing Doctor Strange pop in was a bit of fun, as was seeing Jeff Goldblum, I do love me a bit of Jeff. The soundtrack was awesome, the explosive lightning out of Thor’s arms just as good, Cate Blanchett was a bitch, of course, and Loki finally got his shit together. For now.

Overall, I’d watch it again for something to see on a Saturday night and give it 8/10

Now, while I love a good movie, the problem I have is that Hollywood clearly can’t come up with anything new (above is one remake and two sequels). Instead of taking something that was already a mega huge hit and making it an all-female, all black, all Asian cast, why not make something along similar lines and call it something new.

They apparently want to make James Bond into Jane Bond? Why? Why not just make a kick arse show based on new characters in MI5 and name her something else? Why take a well established male character and make it female/black/asian just to make sections of the community happy? Why not just come up with SOMETHING NEW!!!!

Why does Hollywood constantly have to remake movies and tv shows? Why do tv shows have to continually come back with the old cast? Or new cast for that matter, like MacGyver, Charmed and Magnum PI? Why can’t they just make new versions, change them up, and give them a new name? How many times do you sit down to watch a new tv show that is another cop procedural or hospital drama and all they’ve done is give it a slight twist to make the character different.

Why can’t Hollywood come up with something new for fucks sake?

I will be keeping my eyes open for new stuff coming our way, although considering we’re Australia, we don’t actually get to know what you guys have in America. Hell, channel 9 stopped showing Arrow years ago and yet channel 10 is going to start showing The Flash this week. Five years behind the times, channel 10!

Fuck knows why they bother!

What have you guys watched lately?