I don’t get to read many books these days, other people’s that is. Usually, I’m so entrenched in reading, re-reading and editing my own that I don’t have much time.

I also have that weirdo thing of thinking I’ll absorb the book and sometime down the track start writing it myself. So I try to refrain from reading everyone else’s books when I’m writing.

But, in a train of thoughts and ideas, one led to another. I was trolling Book Depository for Nancy Drew books when I saw the “people who also bought” section underneath. I clicked on book after book after book and most of them sounded really interesting, so I made a list. 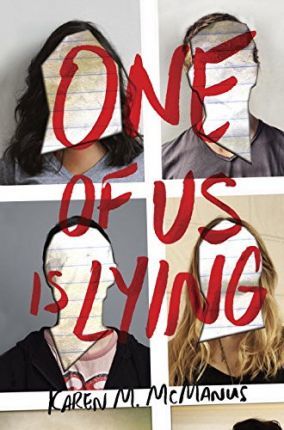 One Of Us Is Lying, by Karen M. McManus, may have been released in 2017, but I’ve only just hear about it. It sounded interesting, and so I borrowed it. I gotta say, it’s one of the few rare books that actually made me 1 – want to buy it after I’d read it, and 2 – want to know more about what the characters got up to after the end.

For those who haven’t read it, here’s the blurb...

Bronwyn, the brain, is Yale-bound and never breaks a rule.

Addy, the beauty, is the picture-perfect homecoming princess.

Nate, the criminal, is already on probation for dealing.

Cooper, the athlete, is the all-star baseball pitcher.

And Simon, the outcast, is the creator of Bayview High’s notorious gossip app.

Only, Simon never makes it out of that classroom. Before the end of detention Simon’s dead. And according to investigators, his death wasn’t an accident. On Monday, he died. But on Tuesday, he’d planned to post juicy reveals about all four of his high-profile classmates, which makes all four of them suspects in his murder. Or are they the perfect patsies for a killer who’s still on the loose?

Everyone has secrets, right? What really matters is how far you would go to protect them.

I’ve never read Pretty Little Liars, but have seen The Breakfast Club, and this book has been described as a mix of both, and it definitely has that Breakfast Club vibe going on. In an interview with Karen, she said – “I actually got the idea while I was driving and listening to the radio,” McManus said, noting that she gets lots of ideas that way. “I think there’s something about having half my brain engaged in a mundane task that kind of gives the other half freedom to roam.” During her drive, the song “Don’t You (Forget About Me)” by Simple Minds from the Breakfast Club soundtrack came on. “I started thinking it would be fun to write an update of that movie, which I loved, but with some sort of a twist,” she said. “And the phrase ‘The Breakfast Club with murder’ popped into my head and it just stuck there.”

You can read the rest of the interview here at Publisher’s Weekly.

It’s a fairly easy read and described as a thriller. I wouldn’t call it a thriller, not like Jonathon Kellerman, Stephen King, Dean Koontz, Lee Child etc, I’d call it more of a teen young adult suspense novel. But then I guess it all depends on what publishing houses call thrillers these days.

The story is told from the views of the kids involved, so it can get a little confusing when you try and remember whose point of view you’re in and who’s currently talking. There were some twists and turns even I didn’t guess, thinking I’d guessed right and it was the detention teacher. Nope, not him. Then I thought it was Maeve. Nope, not her. I kinda fell in love with Nate, guessed what Cooper’s secret was, was surprised by Addy’s change, but could have kicked her for the ending, and was completely surprised by who actually did it.

I’m not sure if I will buy this book. I generally don’t re-read books, and don’t really have the room for my own books and the collections I do have, but who knows. I might one day.

I’m definitely getting Karen’s new book, Two Can Keep A Secret from the library and will be doing a review on that too.

And google the book here, you’ll see all the versions of the cover from around the world. 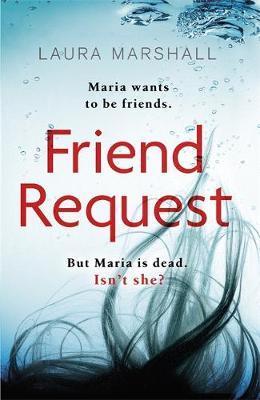 The next book was Friend Request by Laura Marshall, another book found on BD and the concept seemed really interesting. Here’s the blurb…

When Louise Williams receives a message from someone left long in the past she feels sick.

Because Maria Weston has been missing for over twenty-five years. She was last seen the night of a school leavers’ party, and the world believes her to be dead. Particularly Louise, who has lived her adult life knowing herself responsible for Maria’s disappearance. But now Maria is back. Or is she?

Overall, the book dragged on. I became bored and couldn’t wait to get to the end. Another “psychological thriller”, which I’m sick of because they all sound the same and all have girl or women in the titles, it was only the twist in the story kept me going. I had to find out what happened to Maria. Henry (god bless that name), was adorable for a four year old, but alcoholic women who don’t get their shit together, or blame themselves for something they don’t actually know they did, shit me up the wall. I do not want to read about pathetically piss weak women.

I give the book 5/10 for the twist alone. Coz I did not see that one coming.

I have ordered her follow up Three Little Lies, but even though it sounds good, doesn’t mean it is actually good.