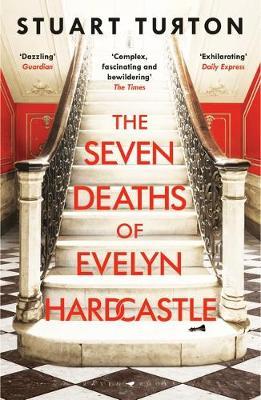 The author, Stuart Turton, was in Australia earlier this year and that’s when I first saw it. It’s touted as a story about a character coming back seven times, into the bodies of other guests to solve the murder of Evelyn Hardcastle.

The way I got it, it sounded like Agatha Christie meets Groundhog Day.

It was anything but.

It was long, drawn out, thick with descriptive paragraph after paragraph and suffocated me with details that weren’t always necessary.

It jumped between characters and days, and became somewhat confusing trying to keep up. The main character of Aiden didn’t know who he was, who he could trust, and how this was all happening.

As he jumped into each character, how he knew and spoke of things that he had previously not come across, thought of, or mentioned was not explained, and you had to struggle to keep up with how could he possibly be figuring these things out without having come across them before.

I read until the end, expecting this to be a murder mystery in the guise of a Miss Marple or Poirot. Sadly, it was not, and left me so stumped at the end I felt bitterly disappointed in the resolution, and like my time had been wasted on what could have been a good simple murder mystery.

The reason why it was happening was not fully explained, nor was why they were at Blackheath in the first place, except that it was because of the family. They were all criminals stuck in a loop until they could figure it out and get out. Get out of what? Jail? Purgatory? Who the hell knows? Towards the end I expected aliens to pop up and claim responsibility for the stupid game like in Under The Dome. The ending was so utterly ridiculous.

Was the murder solved? Sure. Did Aiden and Anna get out? I actually don’t know. I cannot stand endings that are not fully explained. It’s the same as when a TV show is cancelled and you never get your resolution ending.

Maybe I need to google this book to see what it’s actually all about.