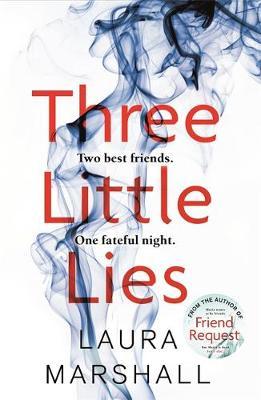 Three Little Lies by Laura Marshall is the follow up to her first book, Friend Request.

There were some things left unfinished, maybe that’s the way they were planned. What Tony was dying of, probably alcoholism, what secret Sasha was really hiding, why Leo kept lying to Ellen, why Ellen was so blind and stupid, why Karina was still so scared ten years later.

I figured about halfway through the book that the person Karina was talking about could be pinpointed down to two. Tony or Nick. I was veering toward Tony, but nope, it turned out to be Nick.

Funny how it was Karina who finally decided to get strong in the end, but only after Ellen forced her into going with her to Olivia and Tony’s house, and Daniel came to the rescue.

I’m over psychological thrillers, I have to say. They are all the same; an insecure woman finding out her life is a lie. All the same concept, different names, different locations, different lie.

They’re boring, but clearly not going away.

It’s time authors stepped away from each book and wrote something new to show us they can write in different genres other than the one they just released in, instead of continually writing the same book over and over.

And I’m wondering if the title was taken from someone else’s book. Trad pub houses come up with great titles for books, but they don’t always align to the actual story, and giving a book a similar title to others is annoying as it gets confusing. Pretty Little Liars, Big Little Lies, Three Little Lies etc…