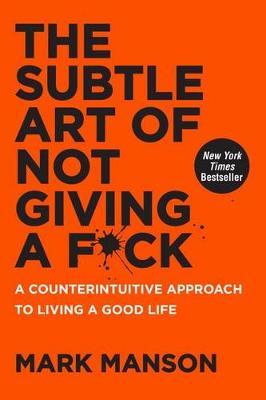 Hopefully, he’s not related to Charles Manson, but then, I wouldn’t be surprised.

Mark was here in the country last month, giving a talk about not giving a fuck. Which is great, since I don’t in general. However, I thought I’d give the book a go to see what it was really about. I’d popped over to his website a couple of months ago and had a quick look, but didn’t stay.

So, let’s not give a fuck about this book…

He tells a lot of stories, and yes, it sucks that his friend killed himself, but in reality, the stories about Mark are of no importance to anyone BUT Mark. We all have our own, and yours are not money inducing, nor best-selling.

The book doesn’t help you in any way, shape or form, it’s just about him, or some stories of other people. It’s definitely not self-help, so don’t bother there. And if you can’t handle the word fuck, A LOT, then again, don’t bother. It’s everywhere.

What this is, is a whole book about one man claiming to not give a fuck when he actually does, he just doesn’t realise it, or maybe he does and just doesn’t give a fuck. It’s all about him, which, I guess was the publishing house’s point, but there is nothing to be learned or gained from the self-centred all important ramblings of a Gen Y who thinks his own shit don’t stink (Aussie saying).

As far as I know, he holds no degrees, certificates, licences in any kind of psychiatry, psychology, mental health areas etc, yet, here he is, spouting his typical narcissistic Gen Y bullshit that shows, in reality, how incompetent some Gen Ys really are.

He was, and possibly still is, incompetent at getting his shit together, and so, felt the need to possibly watch a lot of Oprah, or read a lot of books, and then spout everything he’d read that we’d all read and watched and heard thirty years ago and learned then to not give a fuck.

That’s what Gen Ys seem to be doing these days. They’re stealing good shit from experts, pretending to be experts themselves, and in actuality, that shit was seen thirty years ago on Oprah when you pissants were still shitting in your diapers, tucking your high school uniforms into your knickers, or pulling the wedgies out of your arse.

Gen Ys are so dead set on believing they come up with this shit, when they just come across as half-baked try-hards who think they can espouse top notch advice like a ten-degree-wielding expert.

You can’t, and that’s all there is to it.

God help the fact people think this dude is akin to Buddha, or the Dalai Lama, because he fuckin’ ain’t. 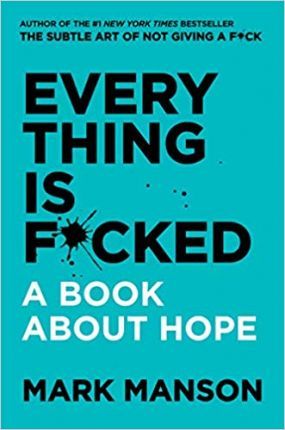 As for the second book, Everything Is Fucked…I’d say at least 2/3 was stories from everyone and everywhere else, not much from him except for him espousing his usual self-indulgent bullshit. Oh, and I didn’t think you gave a fuck, so why write a book about hope…

God knows how this guy was published, but then trad pub houses only want to make money, and if you have hundreds of thousands, if not millions of followers or likes, then they’re heading in your direction. You’re nothing but a cash cow to them, and when the well runs dry, like so many other authors, Mark will fade into obscurity because the only time he wrote books was when a trad pub house paid him to and he STILL owns nothing of his own books. Signed a deal and got screwed over for the long run. Bet he’ll give a fuck then…