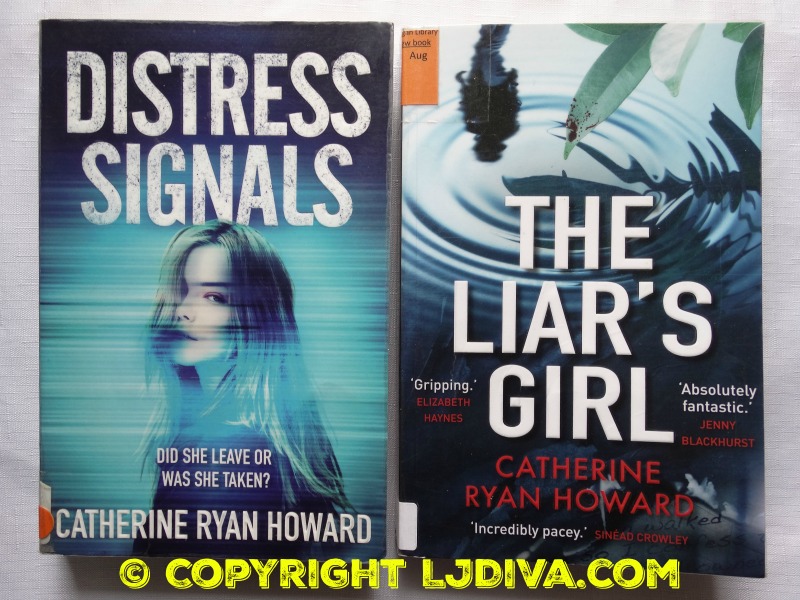 I’ve been following Catherine and her original blog, Catherine Caffeinated for many years, knew she’d self-pubbed for years, and found many blog posts incredibly informative when it came to the legalities for overseas self-pubbers trying to get their ITINs or EINs from the IRS done, plus formatting, and a whole load of other intricacies we all needed to know.

In 2015 she signed her first traditional publishing deal (you can read about that here) and came out with her first book in 2016.

I’ve just recently found her first two books in my local library and read them back to back.

Distress Signals is about going missing on a cruise ship.

The day Adam Dunne’s girlfriend, Sarah, fails to return from a Barcelona business trip, his perfect life begins to fall apart. Days later, the arrival of her passport and a note that reads ‘I’m sorry – S’ sets off real alarm bells. He vows to do whatever it takes to find her.

Adam is puzzled when he connects Sarah to a cruise ship called the Celebrate – and to a woman, Estelle, who disappeared from the same ship in eerily similar circumstances almost exactly a year before.

To get answers, Adam must confront some difficult truths about his relationship with Sarah. He must do things of which he never thought himself capable. And he must try to outwit a predator who seems to have found the perfect hunting ground…

While an interesting story, it didn’t hold my attention even though I finished the book. I found myself skipping pages just to get past some of the characters and what they were doing. I found the main characters incredibly stupid, and the only secondary/tertiary character I felt for was Romain who I felt sorry for as none of it was really his fault. The one thing that really annoyed me was the timelines jump around. I’m over that in books as it’s hard to keep up with sometimes.

And interestingly enough, a passenger went missing on a cruise ship a few days after I finished it,

The Liar’s Girl I found to be better.

Dublin’s notorious Canal Killer is ten years into his life sentence when the body of a young woman is fished out of the Grand Canal. Though detectives suspect a copycat is emulating the crimes Will Hurley confessed to as a teen, they turn to him for help. Will says he has the information the police need, but will only give it to one person – the girl he was dating when he committed his horrific crimes.

Alison Smith has spent a decade building a new life. Having moved abroad, she’s confident that her shattered life in Ireland is finally behind her. But when she gets a request from Dublin imploring her to help prevent another senseless murder, she is pulled back to face the past, and the man, she’s worked so hard to forget.

While it too jumped back and forth between the past and modern day, the story had a little more intrigue, a little more action, and a twist at the end I didn’t see coming, but in retrospect, upon some thinking, made sense and wasn’t that much of a surprise. I also wasn’t sure if there was a romance blossoming between the character and an officer, but wouldn’t be surprised if that happened.

Catherine’s second book was definitely better than her first, and I’m hoping we get her third book, Rewind, sometime this year.

For more info on Catherine, head to her blog www.catherineryanhoward.com