Since I blogged about sex a couple of days ago, I thought I’d continue the theme.

You don’t blow it, you suck it, so then shouldn’t it be called a suck job????

Although here in Australia, when someone is sucking up to you and being overly nice and sickly sweet, we call that a suck job.

So maybe it shouldn’t be called that, but still, does anyone know when the term changed?

ps – I know, not the normal subject I would be talking about, but I’m overly curious!!!

OH MY FUCKING GOD! You all have GOT to try this.

I bought it yesterday as I was in need of a new body moisturiser. Being winter here, I get very dry, especially on my legs.

So I rubbed it all over this morning after my shower, and OH MY FUCKING GOD I smell SO FUCKING GOOD!!!!!!

Anyhoo. If you’re a chocolate addict like I am, smelling like cocoa all day is something I’m going to definitely continue doing. And it makes me a smooth as a baby’s bot bot.

I HIGHLY RECOMMEND THIS PRODUCT!!!!!!!

Michael and Carmine are going to love this!!!!!!!

I found this article in our local Cosmopolitan magazine and thought it was quite relevent to today’s woman. Especially me, since I love me some massively huge earrings. And I also may use the body shapers. And yes, as a big chested woman, the bra straps are a pain in the arse.

So there ya go, bra straps are my bitch for the day! What’s yours? 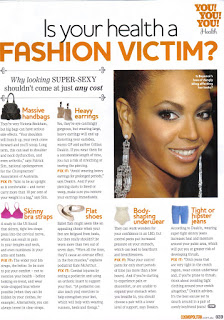 I know I’m going to possibly repulse people here, but so what! It’s my blog.

Anyhoo, the captain of a football team has come out and told the world he has cancer. Everyone’s crying, everyone’s freaking out, everyone’s going OH MY GOD!

Except me. Why? Because I don’t give a shit, it’s only cancer.

Now that may make me sound heartless, but I’m not. I know cancer is a disease that can take your life. It can also be a turning point when you survive. But seriously, just get on with it and stop whinging and whineing about having it.

To me, cancer has become an everyday disease. Why? Because everyday, someone is told they have it. So it no longer has an affect on me. It’s like, so what, get treatment and deal with it.

Just being a human being means you can get cancer. Being a woman, I can get it in my boobs, my vag, my ovaries etc, but there’s one way I can get it faster than that. Because I have moles!

Yes, as I have mentioned before, I am covered in them. The sun will burn you in 11 minutes, and a mole turns into a melonoma in 6 weeks. Facts from the Cancer Council of Australia. I counted them many years ago, and I came to 764 spots, moles and freckles. If ALL of my moles turned into melonomas in 6 weeks, I’d more than likely drop dead in that instant. I’ve had some removed, but I know many have formed since.

My mother had a melonoma. I was ten, and it formed from a small mole on her arm. Way back then, she needed to have a huge hole in her arm, covered by a skin graft from her leg. She didn’t get all upset, woe is me and freak out. No! She had me to look after and a life to get on with.

I know cancer is serious, and you need to make sure your will and wants and needs are taken care of, but seriously, when you find out you’ve got it, don’t tell the world, don’t go on tv and blubber, don’t crawl into a ball and never come out from under the covers.

Accept that you’ve got it, have a good cry, then get on with your daily life, have your therapy or pills and stop carrying on like it’s the end of the world!

For God’s sake, you could get hit by a bus tomorrow, but at least you can survive cancer. And having it ain’t the end of the world.

It’s just a pity that the tv, radio and print media carry on like pork chops when it comes to celebrities having cancer. Sometimes the media goes overboard. Have a bit of dignity, like Farah Fawcett. She got on with living and treatment, until she knew she couldn’t do it any more.

There is a time for acting like a childish idiot later, but when you find out you’ve got cancer, it’s time to get on with life and live for what you’ve got, not what you’re about to lose.

Just make sure your will is in order, then get on with living life. Cause it’s gone all too soon.

Yes, we all know that Michael Jackson has died. And yes, we will all not agree with the sort of man he was.

Australia has shown quite a few tributes to him in the last few days. There was one last night on channel 9.And there’s two things that stand out to me more than anything else. He had two sides to his personality.

The abuse at the hands of his father from the moment he was born, would have gone well towards stumping his mental growth. An interview with Oprah, many years ago, brought up the subject, and she mentioned how his father would beat him, then he would go on stage and perform.

Was an arsehole of a father!

Michael’s mental growth stopped at what, 8, 10, 15 years of age. The networks have showed footage from way back when the Jackson 5 first started. The audition for Motown, showed an 8 year old Michael performing for Berry Gordy.The Jacksons sold more than 150 million albums as the Jacksons.In 1979, Michael launched the Off the Wall album, then officially split from the Jackson 5 in 1984, to have his own career.

But did the abuse ever stop?

I don’t think it did.

I agree, that Michael was more than likely the biggest entertainer in the world. Not too many have four and a half decades of a career. He lived, breathed and died a performer. But then his father did beat that into him.

Because of the abuse, he disappeared when he was on stage. It was his refuge, his blood, his breath, his life, his escape from Joe Jackson. And that’s where he stayed. All through his life, the stage was where he was.

Michael’s emotional growth stayed as a child. No wonder he believed what he did. That sleepovers were the norm, and sleeping in the same bed with boys was loving and normal.

To us it wasn’t. To his 10 year old brain, it was his way of living the childhood he never had.

You can watch old footage and interviews, and piece together his frame of mind. As a performer, he was all work, adultlike and driven in his career. But as an emotionally fragile man he was a child desperately trying to have a childhood and relive the life he so desperately wanted, that was taken from him by that arsehole of a father, who will no doubt now struggle to gain whatever fortune is left.

Joe Jackson is to blame for the way his children turned out. So is their mother Katherine. She allowed Joe to abuse her children, and in the process he no doubt abused her.

How many have had drug problems, been bailed out of jail? Look at La Toya and her problems, she was once married to an emotionally and physically abusive man like her father.

Janet married young, although she denied it. Was that an escape from her father?

God help the children of all the Jacksons, because there may well be another generation of stunted adults, like their parents.

I’m a big believer in the law of karma. A soul chooses the parents it will be born to, the family it will be born into, and the path of life it will take. There would have been lessons along the way, and who’s to say Michael learned any of them. A soul also knows when and how it will die, and leave this earth. Michael knew. He mentioned in interviews he knew how he would go. And after seeing them, I don’t doubt that he did.

Maybe that’s why he lived the life and did the things he did. Because he knew he was going in too short a time. That he would not have a long and fruitful life. Who knows? He did.

When it comes down to it, Michael, the man, was one most did not like. He was a molester, a monster, a man who should not be around children. And they certainly didn’t mind taking his money from him.

But Michael the performer, was one we may never see again. He was an original, and to those that loved him, they will miss him terribly. And to those of us who didn’t love him, the world will go on, and a new performer will come.