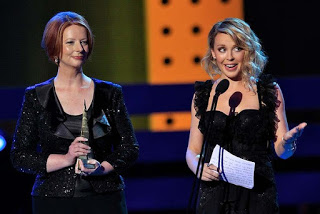 Last night the ARIA’s (Australian Record Industry Awards) were on and for the love of God, our bitchface Prime Minister, Julia bitchface Gillard, presented Aussie singer (although she’s lived in London for the last, what? 20 years) Kylie Minogue.

Now what in the fucking hell was she doing there?

She’s a bit like the Prime Minister she stabbed in the back for the leadership (Kevin Rudd) in thinking they are more popular than they actually are. She’s an up herself bitch who thinks she doesn’t have to listen to the “people” of Australia and she can run the country how she likes whether WE like it or not.

If you’ve read my blog or watched my vlogs, you’ll know how much I hate her guts. Last week on Twitter someone called her a dog. WHO GIVES A FUCK! I think she’s a bitch and a cow. We all have the right to freedom of speech yet unfortunately some people think they have the right to turn around and tell us that what we say is wrong and not “allowed”.

We either have free speech or we don’t!

If someone wants to call her a dog so be it. Like I wrote, she’s a cow and a bitch and that’s my personal opinion and I’m entitled to it!

Listen you old fart, if there’s one thing you need to learn, it’s that you’re a has-been and you suck! S.U.C.K SUCK!!!!!
In an interview with the Sunday Herald Sun, the ARSEHOLE vowed to convince other artists not to perform at Australia’s football grand final. His performance was described as the worst in AFL entertainment.

He blamed the AFL for not providing a live piano or offering enough time for a sound check. Parts of his performance were out of time and flat because he was singing to a tape and could not hear the music in his earpiece. “I’m sorry, they’re jerks. I do not like them,” he said of the AFL. “And I’ll tell you what, anybody that I hear announces that they’re going to play for them I’m going to write that particular artist a letter and tell them not to. And I hope the AFL hears this and I want this everywhere. Because I will go out of my way to tell any artist do not play for them.”
Again, you’re an arsehole for thinking we ACTUALLY gave a shit about you OR your performance. What we DO know, and what we DID see, was that you SUCKED big time and it was ALL YOUR FAULT.
Listen SHIT LOAF, we don’t care if you ever come back. We don’t care if you ever perform here in Australia EVER again. We don’t care what you think because you are clearly delusional, self-absorbed, self-occupied, head up your own arse, shit in your ear nutsoid and we don’t want you here EVER again.
Shit Loaf, you are the weakest link, Goodbye!
Jewels xxoo

Apparently the contorversy over Beyonce’s baby bump was because it seemed to collapse on an Aussie tv show interview. She looked big, sat down, it went weird. She claims it’s not fake, she’s really pregnant, but it hasn’t stopped everyone from running the story like it’s the most important news in the world.

So after TT made their big reunion with Robbie last year they released Progress. This year they added to it with a double cd, Progressed. Glad I waited. I’ve been listening to more of the songs on disc two than one. Although I absolutely love SOS from cd1, and now I’m getting into The Flood, I actually prefer Beautiful, Aliens and Man from cd2. So here’s a few songs to let you hear how great they still are. Kidz, The Flood into SOS, and their comic relief video with “Fake That”.

I got Lady Gaga’s new cd yesterday and played it last night. Just listening to this song I felt stronger, emotionally, not a lot, but a little. Definitely a new anthem. 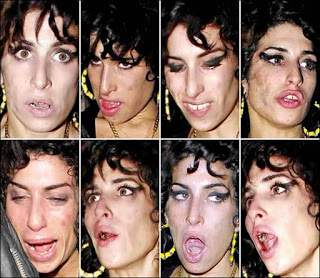 Whether you snort it, inject it, swallow it. Drug addicts are drug addicts.

Drug addicts don’t “accidentally” overdose. There is no such thing when you’re a drug addict.

When you are a drug addict you know there will be a day you don’t come back. There is only one way to fix it and that is to make the choice to stop.

Amy made the choice.

I just want to know who called the ambulance.